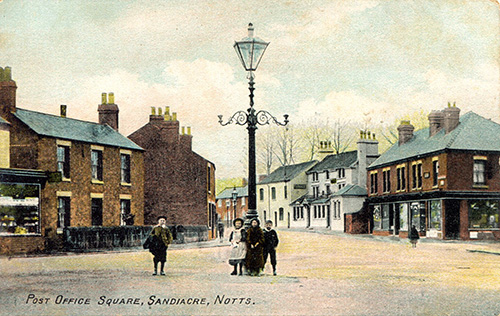 The origin of the name Sandiacre has been given various interpretations, but the most likely is that it comes from the Saxon 'sond' meaning sandy and 'oecer' meaning field. This is borne out by an area of sandy soil around the church contrasting with the surrounding clay. A Bunter Sandstone escarpment, known locally as Stoney Clouds, lies at the northern end of the village. Below the escarpment, to the east, lies the River Erewash, which forms the county boundary with Nottinghamshire. Flooding from the river was a regular occurrence in the village until remedial work was carried out in the 1960s. A large part of the medieval ridge and furrow field system is still evident in the flood plain between Ilkeston Road and the Erewash Canal. In 1991 Erewash Borough Council purchased land at Stoney Clouds for use as public open space and it is now maintained as a nature reserve.

Sandiacre was probably first settled in Saxon times. By the time of the Domesday Survey in 1086, the Manor of Sandiacre was held under the king by Toli, one of the royal thanes and there was a church with a priest and a mill. The whole village was valued at 40 shillings. The manor was held by the Grey family from c.1224 until the family line ended in the early fifteenth century and the manor passed by marriage to Sir John Leke. Nicholas Leke, the fourth Earl Scarsdale, died in 1736 and the manor was sold and passed through several hands until by 1819 it was held by Thomas Pares of Hopwell Hall. His grandson, Edward Henry Pares JP inherited the manor in 1878 and later sold Hopwell Hall. By the end of the nineteenth century, the Lord of the Manor was no longer the principal landowner; by 1891 the principal landowners were the Ecclesiastical Commissioners and Robert Posnett Stevens of Risley. 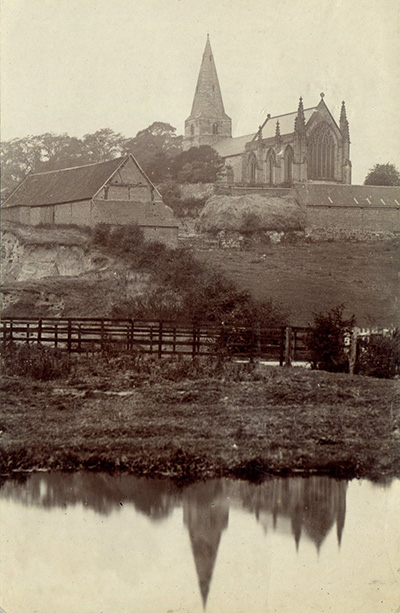 The earliest settlement clustered around Saint Giles' Church, occupying a defensive position overlooking the portway, an ancient trading route linking the Peak District to the Trent Valley and in close proximity to the ford over the River Erewash. Medieval Sandiacre was a settlement of some importance. In 1268, William de Grey received a grant for a market on Wednesday and Saturday and for an eight day fair at the festival of Saint Giles (1 September) and the right to have a gallows was granted in 1330. The most likely location for the old market place is the area around the junction of Church Drive and Starch Lane. The Lock-up and Pound (Grade ll Listed) in Church Street date from about the late eighteenth century but the nearby stocks were removed in the nineteenth century.

A timber framed tithe barn was built to the south of the church in the fourteenth century. This was dismantled in 1973 but sections of the timber frame were re-assembled at the Bosworth Battlefield Heritage Centre in Leicestershire in 2004.

It appears that the ford fell out of use by the late medieval period and a new causeway and bridge were established on the site of the present river crossing. As a result, the settlement began to expand away from the church towards the Nottingham to Derby Road. The later years of the nineteenth century saw the development of terraced housing to the north and south of Station Road.

There was extensive housing development between 1914 and 1938 away from the historic centre and further housing estates were developed throughout the twentieth century.

Sandiacre remained a small, mainly agricultural village until the industrialisation of the nineteenth century, when lace making and other industries became established. John Smedley had started 'warp net' lace making in Sandiacre about 1819 and Croft Mill was built for him in 1843 at the junction of Church Drive and Starch Lane. Four 'bobbin net' lace makers arrived in Sandiacre between 1826 and 1829.

Three substantial lace factories were built in the late nineteenth century because the increase in the number of lace machines in operation between 1875 and 1885 could not be accommodated in Nottingham. All lace production in Sandiacre had ceased by the 1990s. 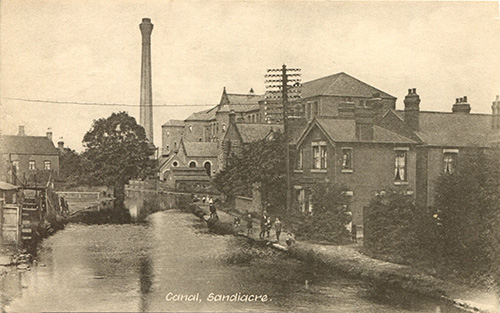 Springfield Mill (Grade ll Listed), on the eastern side of the Erewash Canal, was built by Terah Hooley in 1888 as a tenement lace factory at a cost of £12,000. In order to prepare the site, the River Erewash had to be permanently diverted. The machinery for the clock is by Smith of Derby. The boiler house chimney, saved from demolition in 2002 before the Mill was converted into apartments, is a prominent local landmark.

The Mill was served by its own gas works, which also supplied the gas to 50 street lights in the village. These were donated by Terah Hooley on the condition that the Parish Council paid for the gas; two of these lamp standards can still be seen on Padmore Moorings.

The extensive starch works of Lawrence Hall were built in 1837 between Lenton Street and the Erewash Canal but only continued in production until 1888, shortly after it had been bought by Colman's of Norwich. The building subsequently became Excelsior Foundry Works, which itself was closed down in 1957.

The area along Station Road was the centre of varied industrial activity which provided employment for much of the local population. Early twentieth century employers included Taylor Brothers Foundry, Crossley Premier Engines Limited, Lace Web Spring Company, Buoyant Upholstery, Sandiacre Screw Company and the Springfield Cycle Company, most of which have now ceased production or moved away. 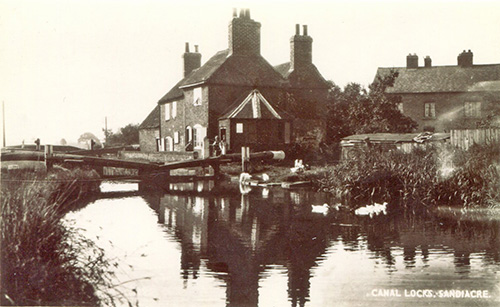 The Erewash Canal, linking Trent Lock to Langley Mill opened in 1779 and was constructed for the transportation of coal from the Erewash Valley coalfields north of Sandiacre. The original Sandiacre lock cottage dates from 1779 and when the Derby Canal was completed to form a junction with the Erewash Canal in 1796, a further cottage was added together with a toll house to serve both canals. Commercial traffic on the Erewash Canal ceased in 1952 but it was upgraded to a 'cruising waterway' in 1983 and is now popular with leisure boaters. The Derby Canal was finally abandoned in 1964 and filled in, although its route has been maintained as a foot and cycle track. The Derby and Sandiacre Canal Trust is working to restore the route as a navigable waterway as close as possible to the original route, creating a cruising ring and reconnecting it to the national canal network. Ropes for canal and general use were made in a ropewalk on Longmoor Lane.

The road from Nottingham to Derby was a turnpike road from 1759 until 1870, when its Turnpike Act was allowed to expire. A humpback bridge was provided over the Erewash Canal. There are three public houses in the vicinity of the bridge which may have served as coaching inns. The current White Lion built in the 1930s, stands on the site of what is believed to have been a coaching inn, The Coach and Horses, in the eighteenth and early nineteenth centuries. Horses would have been changed here before beginning the ascent up Derby Road. Today, the road crosses the canal via the bridge built in the 1930s to replace the original humpback bridge. In order to ease congestion at the canal bridge by taking through traffic away from the centre of Sandiacre, a by-pass (A52) was opened in 1965 in the same year as the local section of the M1 was completed.

The Midland Railway opened a branch line along the Erewash Valley in 1847 and Sandiacre was served by Stapleford and Sandiacre Station from 1848 until 1967. There was a small goods yard for the receipt and distribution of raw materials and finished goods. 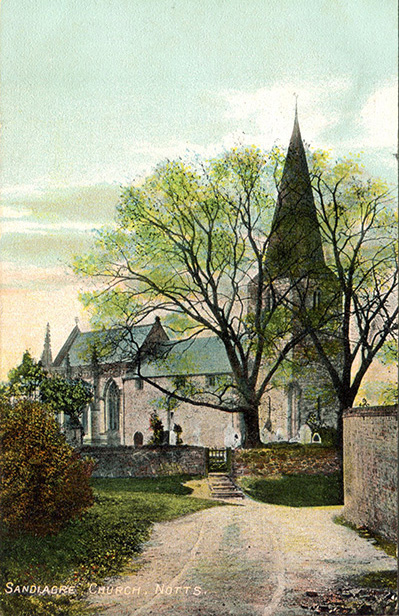 Saint Giles' Parish Church (Grade l Listed) is considered by Simon Jenkins to be one of England's Thousand Best Churches. It represents 3 important building phases: twelfth century nave, thirteenth century spire and fourteenth century chancel with remnants of an earlier Saxon building. The chancel which is taller than the nave and only six feet shorter was the gift of Roger de Norbury, Bishop of Lichfield, who held the Prebend of Sandiacre between 1342 and 1347. The interior, which provides a great contrast between the simple Norman nave and the magnificent decorated chancel, contains many interesting architectural features and memorials.

In 1881, a peal of six bells, which replaced a ring of three Elizabethan bells, was gifted by Joseph Stevens a prominent lace manufacturer and owner of Sandiacre Hall. In 1997 it became apparent that the whole peal was too heavy for the tower and a major overhaul resulted in the installation a new bell frame together with significant repairs to the tower itself. The two heaviest bells were broken down; two new bells, inscribed with the year 2012, were cast and the new ring of bells was dedicated in 2013.

Pear Tree House (Grade ll Listed) situated on Town Street on the western bank of the Erewash Canal was built in the early nineteenth century and was the home of George Rossell who established his veterinary practice there in 1851. He continued to practise until his death in 1901.

Dr. Bland's Almshouses (Grade ll Listed) on Derby Road were built by local builder George Bastable in 1910. Dr. Edward Bland (1825 - 1909) came to Sandiacre in the early 1850s and established his medical practice on Station Road. He served the community for over forty years and he was held in such high esteem that several hundred residents attended his funeral in April 1909. In his will he left legacies to several charitable causes together with money for the erection of four almshouses.

Following the 1870 Education Act, The Board School on Church Street was constructed in 1878 and consisted of three departments: boys, girls and infants but was later extended to accommodate the growing population.

A separate Infant School, built in 1907 on Victoria Road, was designed in the Arts and Crafts style by George Widdows, who is considered to be a nationally important architect. 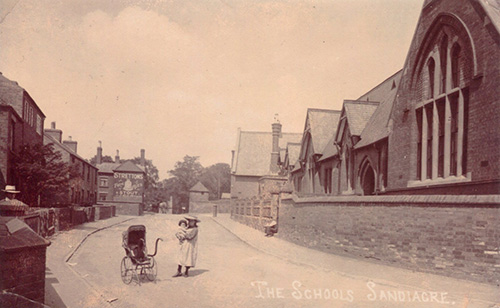 The Board School building was demolished in the 1970s and the replacement Cloudside Junior School was opened by Margaret Thatcher, then Minister of Education, in 1972.

Sandiacre Memorial Institute on Doncaster Avenue, designed by architect H Tatham Sudbury of Ilkeston, was built in 1920 in memory of the 69 Sandiacre men who gave their lives in the Great War. A new wing was added to the building in 1935, a gift from Sir Robert Doncaster as a memorial to his eldest son Robert Ivan Doncaster, who had been killed in the war.

Methodism was strong in this area and the first meetings were held at Henry Taft's farmhouse. John Wesley, the founder of Methodism, preached in Sandiacre in 1770 and 1780. By the mid nineteenth century, there were 3 chapels in the area of Town Street serving the Wesleyans, the Primitive Methodists and the Wesleyan Reformers.

The Wesleyans moved to a new, larger chapel, known as Top Chapel in 1878. This closed in 1979 and the site is now occupied by housing. The Chapel on the Bridge, built for the United Methodist Free Church in 1887, closed in 1965 but has now been refurbished and is back in use as an events hall.

The Primitive Methodists used chapels in Mill Lane and Town Street before moving to the new Clowes Chapel in Butt Street in 1910. Only the schoolroom was ever built and it was known locally as Wagg's Chapel. The new Sandiacre Methodist Church, adjoining Wagg's Chapel, was opened in 1981. 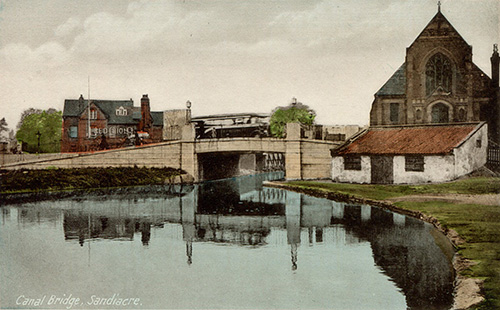